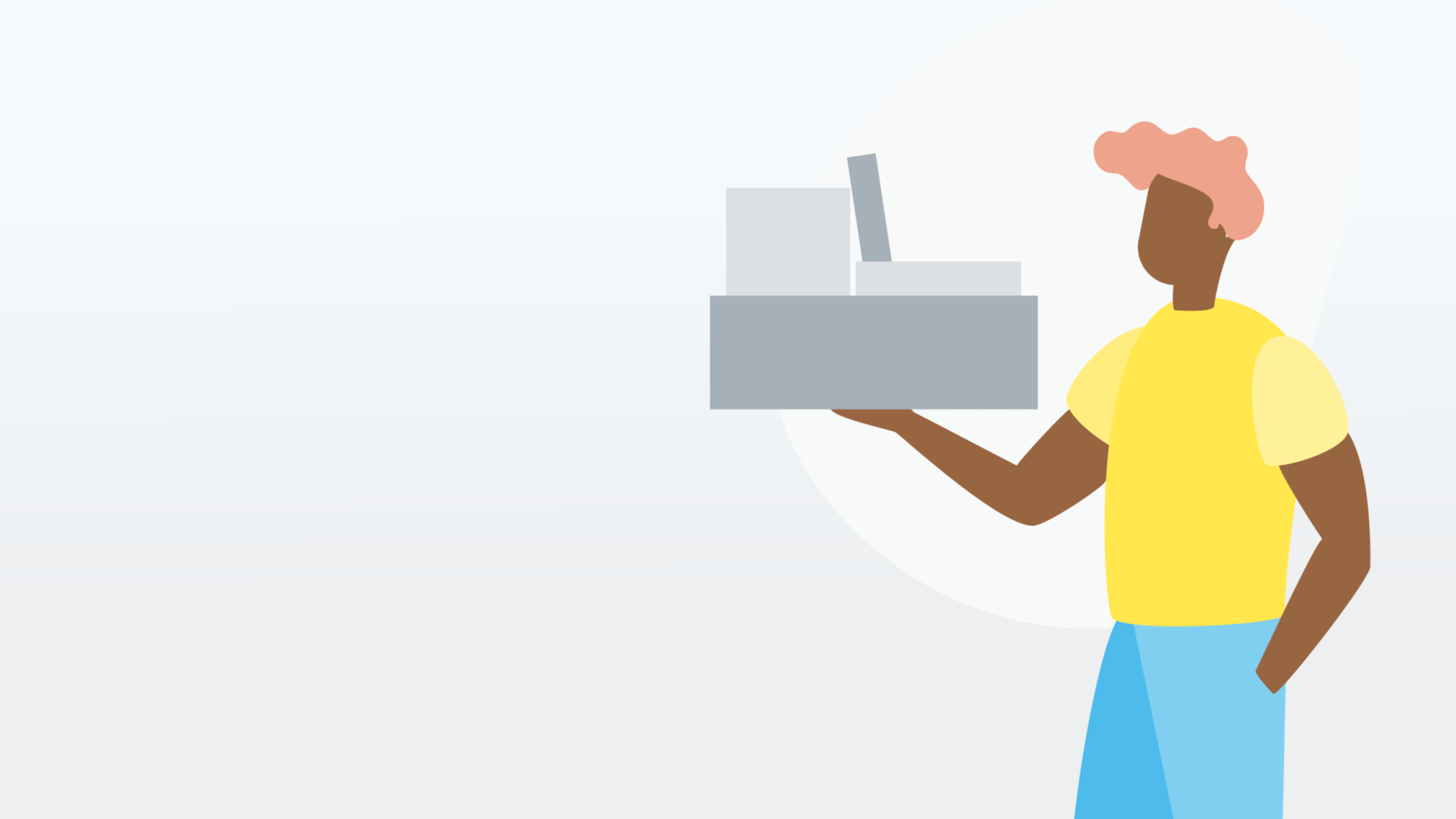 Hello and welcome to Kick Start.

I’m Alice from Christians Against Poverty

and in this session we’re going

to talk about handling your habits.

habits play a part in all of our lives.

Around 40% of the things we do each

and every day are out of habit.

or backing the car out of the driveway.

our brain organises the information into a pattern so

that we can do them without thinking,

and this saves energy.

Unfortunately, this is true for both our good

and our bad habits.

Through our work with hundreds of local churches,

CAP has seen hundreds of people break bad habits by

learning and applying this knowledge.

In this session I’m going

to explain to you exactly how habits work

and how you can apply this knowledge

to break your own bad habits and dependencies.

This pattern in our behaviour is called the habit loop,

and it’s made of three elements.

The trigger — what causes the behaviour.

The routine — the behaviour you do routinely in response

The reward — what satisfies the trigger.

For example, consider how you would train a dog to sit.

The trigger would be when you say sit,

the routine is the dog sitting,

and his reward is the treat.

If we repeat this pattern a number of times,

the dog will learn that when he hears the trigger,

the word sit, he’ll perform the routine by sitting

and he will get that treat.

he always gets bored at work around 3pm.

He finds himself getting up from this desk,

walking down the corridor to the vending machine

and buying a chocolate bar.

Joe’s trigger, what causes the behaviour,

is that he’s bored.

he needs a break.

His routine, the behaviour he does in response

to the trigger, is that he gets up from his desk,

walks to the vending machine, and buys a chocolate bar.

The reward, the satisfaction of the trigger, is overcoming

that feeling of boredom by eating the chocolate bar.

In all habits there’s a clear trigger,

a repetitive routine, and a reward,

which is the result of that behaviour.

The good news is that you can change

your habits by identifying the triggers

and then changing your behaviour in response

and have a go at applying the habit loop

See if you can identify the three elements

we’re going to look at the harder issue to identify,

what triggers this behaviour.

Understanding our trigger is the key

to overcoming our habits and dependencies,

into the following three categories.

such as location, time of day, the people you’re with.

For example, you’re trying to give up smoking

but whenever you go to the pub with

your friends on a Friday night

you always end up having a cigarette.

Secondly, poor self-worth or identity can be at the root

For example, if we have negative feelings about

ourselves it could mean that we seek a way

of making ourselves feel better,

which gives us a temporary high through drinking,

or smoking, or eating.

And thirdly, our emotional state can easily

It could be that anger is the root of our dependency,

to have a smoke just to calm down.

Or maybe worry triggers your dependency,

for example, when you become anxious you feel

that you need a drink.

So what can you do?

In most cases you can introduce ways

to avoid your triggers and to remove the temptation.

For me, I’m more likely

to eat chocolate if it’s in the same room as me.

So just putting it into a different room is a simple

but effective way for me to avoid the temptation

For you, it could be as simple as not

going on the computer alone.

Travelling a different way home if

that are on your usual route.

Or by being intentional in trying

to get a better night’s sleep if

you struggle most when you’re tired.

Unfortunately, in some situations you may be facing,

it might simply not be possible to avoid your triggers.

In these cases it’s so important

that we learn different ways

of responding when they do happen.

This means changing our behaviour.

Let me introduce you to James and Aida.

The gambling had started,

just as a young lad who liked sport

and had some spare money,

just started to put the odd gamble on.

It just spiralled, I don’t think I ever even

realised how significant it was,

and how tiny it had started,

from a few quid on a few bets

to actually sometimes betting over 1,000 pounds on a weekend

and losing huge sums of money

and all my rent and stuff.

So was having a significant impact on my life financially

but also in terms of how I was spending my time.

And sort of very much consuming a lot of my thoughts

and how I would behave with others,

and was having a really significant impact on my wife too.

I ruined a good chunk

of one of my wife’s best friend’s wedding day

because she was being a bridesmaid

and they were preparing some stuff.

And I wanted to gamble before

I went to the wedding so I’d gambled all our money,

I rang my wife I was saying ​‘What’s the credit card number?

I need to gamble, I need to win our money back.’

And she was in the middle of trying

to help her best friend get ready

for her wedding before I went

saying, ​‘I’ve lost all your money

and what’s our credit card number

because I’m gonna win it all back’.

so when you start to think about it,

oh yeah, there’s something that makes me go

and do the habit that I have.

If I cut out the looking at the odds,

although I still wanted to gamble,

then I was much more able to combat the dependency.

Typically with a lot of the stuff

the bookies will put on adverts

and stuff like that to try and get you to bet live.

So I agreed with my wife

that I would switch it off over half time

so I would be less likely

to be exposed to this stuff,

to have that trigger come at me

and then have that undermine my resolve.

That was really tough but now

that I don’t have that dependency

we are free really, we’re free to choose.

And off the back of that

My job’s changed a couple of times,

really enjoy it now, have more responsibility at work,

And my wife and I, I would say, hopefully she would say,

Have gone on to have two boys in a house we own,

would never have been able

to get a mortgage with my gambling problems.

Being released from those habits of gambling

the most significant thing that’s happened to me.

I just dunno what it would be like if

I was still gambling, particularly.

And I was depending on it so much.

It was tiring, it was expensive,

it was everything which is not good.

The reason I got hooked on it as well is,

it’s not like people say, ​‘Oh my friends were having

and I wanted to be’.

I suffer from a bad panic attack and depression anxiousness.

I used to get it in middle of the street, in station,

I start getting sweaty, I can’t talk, and I just cry.

So if I stand there with cigarette nobody questions me.

I was sort of killing myself slowly.

But it was helping me for that minute,

So mine is issue is my depression, my anxiousness,

my finance, and my me.

For my anxiousness I know when it comes,

it’s because I don’t want people to think I’m loony,

so I’m standing there smoking

to make them feel.

But no, next time I will go to coffee shop

and sit and drink water.

There is a chewing gum which is like a cigarette,

so I use that sometimes when I get a chance.

Or I never take my cigarette out with me.

Then I will never buy because it’s more expense.

Life is different one way

but it’s not in another way,

because I still have my depression,

I’m still on my antidepressants.

But at least I’m willing and I’m learning how

to handle my dependency.

Now, I love me, because I’m imperfect,

and that’s my perfection, is my imperfection.

So, as we’ve learnt in this session, identifying

your triggers, learning to avoid them,

and changing your behaviour in response is key

to the success of overcoming bad habits.

You’ll need to be intentional and put the work in,

but using these steps we’ve seen many people find freedom

from their habits and dependencies.

How could you avoid your personal triggers

and what behaviours could you change in response?

Whether we like it or not, habits play a part in all of our lives. In fact, around 40% of the things we do on a daily basis are out of habit. Unfortunately, this includes both good and bad habits. Through the work of CAP and local churches, we’ve helped hundreds of people better understand what triggers their habits, empowering them to find freedom.

By the end of this session, you should feel more able to understand and recognise the three stages of the habit loop, how this relates to your own habits, and how to avoid triggers or changes in your behaviour in response.

Yes! We offer additional facilitator resources, such as guidance on activities and discussions, to allow you to run this as a group session for your church or community. Fill out the form and you’ll receive an email confirmation with instructions on how to access your free resources.

Did you find this session helpful?

How your church can be involved

Find out how your church can take action and help bring an end to UK poverty.

Find out how you can make a difference with your skills, time or finances.

Get help near you

If you’re looking for help, whether that’s help to get out of debt, find a job or gain vital life skills, Christians Against Poverty provides a range of free professional services across the UK through local churches.